Biography
She studied in Paris the recorder technique and interpretation with Berry Hayward and the harpsichordist-musicologist Antoine Geoffroy-Dechaume.

She received a gold medal and a unanimous Prix de Virtuosité at the Regional Conservatory of Rueil-Malmaison, as well as the State Diploma in early instruments.

She earned a Bachelors degree (licence) at the Sorbonne (Université de Paris IV), subsequently teaching at the Schola Cantorum for four years, prior to conservatories teaching in the Paris region.

She was artistic director for among others the La Follia Madrigal label in works of Josse Boutmy (LFM 30301) and Pancrace Royer (LFM 40401) with the harpsichordist Mario Raskin, and in works for mandolin solo played by Florentino Calvo.

In addition she participated in several recordings by the Berry Hayward Consort devoted particularly to Italian music from the time of Frescobaldi and to music by Juan del Encina.

In 2012 she issued on the La Follia Madrigal label a record (LFM 12031) devoted to the Partita and to sonatas by J. S. Bach for recorder and obbligato keyboard accompaniment, with the harpsichordist Mario Raskin.

For several years she has played in concert during the Saisons Musicales de Montsoreau, particularly with the harpsichordist Mario Raskin, performing as well in other ensembles.

In 2007 she published a soprano recorder method with Editions Henry Lemoine.

She has taught recorder and early music in several conservatories, and is actually teaching in the conservatories in Bagnolet (Seine Saint-Denis) and Le Kremlin-Bicêtre (Val de Marne). She is member of ERTA-France, European Recorder Teachers Association. 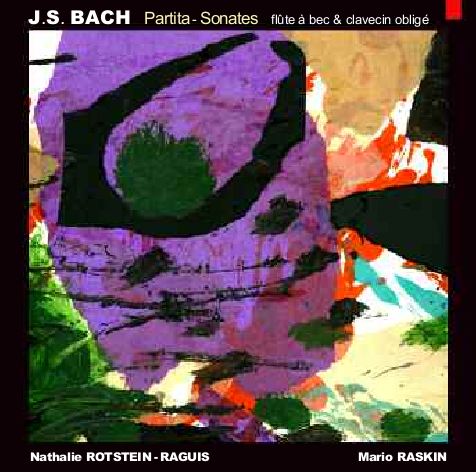 
The repertory and the expressive resources of the recorder are generally unfamiliar to the general public. The esthetic of its timbre is related to that of the organ, while providing it with the richness and depth of wood. The sonatas for violin by Johann Sebastian Bach lend themselves particularly well to performance on this instrument, which reveals them in a new light.

All the sonatas on this disc are among the sonatas for obbligato (or concertant) harpsichord; they differ from the sonatas with thoroughbass in their contrapuntal and harmonic conception, thus evincing a texture in three voices of equal importance, in constant, flowing dialogue between the two instruments, a balance of the voices that the recording techniques chosen were intent on enhancing.

In his recording the widespread practice of re-instrumentation or self-transcription for different instrumental forces, affords the modern instrumentalist a liberty that enables the recorder to give life and breath, given the warm qualities of timbre that are its hallmark, to a repertoire of incomparable richness.

The programme of this recording was designed to highlight the warm sonorities of the harpsichord and the recorder following three facets: sonatas transcribed for flute, those written for flute and the Partita for flute solo.
The BWV 1017 and 1029 sonatas were written for violin. The transcriptions consist in modifying keys and octave transposition so that the writing is adapted to the recorder range. No other modification was made. However, it is worth noting that the practice of transcription was particularly widespread from the Middle Ages through Bachs era. Johann Sebastian Bach himself revisited any number of his own works by modifying the instrumentation.

The BWV 1020 and 1030 sonatas are among the sonatas for flute, whereby the very question of instrumentation may be raised in relation with certain manuscripts. The sonata BWV 1020, while still published under the name of J. S. Bach in certain editions, is nowadays attributed rather to one of his sons, Carl Philipp Emmanuel. Its stylistic difference from the other sonatas, present to be sure but by virtue of its position in this recording, provides an opening onto the future.

The sonata BWV 1030 represents one of the finest sonatas for flute; the first movement Andante is the longest ever written by Bach in his flute sonatas, the motifs move about in responses and dovetailing between the two instruments in a context of considerable textural density.

The Partita BWV 1013 for solo flute presents an enigma for any wind instrumentalist: practically no rest or articulation throughout the suite of dances. Bestowing meaning on the work thus becomes ceaseless exploration of phrasing within perpetual questioning.